Google’s Physical Web: Everything You Need To Know

WHAT IS GOOGLE’S PHYSICAL WEB?

Described by Google as “an approach to unleash the core superpower of the web,” it’s an “interaction on demand” concept in which people can walk up to any smart device, be it a vending machine or a bus stop, and not have to download an app to interact with it. “Everything should be just a tap away.” The result is an open ecosystem where URLs are broadcast, devices pick them up and they’re listed in a way that almost mirrors today’s search engine behaviour.

HOW DOES IT WORK?

So how exactly does it work? The answer is quite simply with low energy Bluetooth beacons. These beacons have the ability to last five years on a single charge and broadcast a URL once every second. Using a simple scanner on your phone or tablet that looks around whenever it’s “awake”, the scanner will discover every beacon around it and give you a list of URLs to choose from. Not only that, the list is ranked and filtered to reduce spam and ordered to bring the content most relevant to you at the very top.

URLS – NOT APPS – ARE THE FUTURE 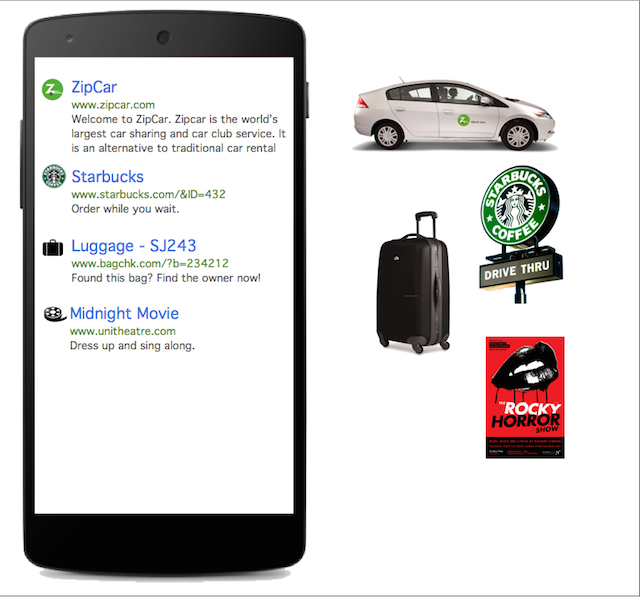 In essence, Google’s Physical Web is suggesting URLs are the future, instead of apps. Which, when you think about it, is rather interesting. Taking a step back to the bare bones of the Internet in order to take two forward, the examples Google provide in the idea’s introduction come in the form of utilising a movie poster to see what it’s about and when it’s showing next, a bus stop to see when the next one’s due, a dog collar to find its owner and a parking meter to pay your parking. In other words, as long as you’ve got an object and a phone or tablet to interact with it, anything is possible.

Scott Jensen of the Google Chrome team explains how “the Physical Web is just an extension of the existing web. Like all web technologies, it’s open and anybody can build on it. Because it uses URLs as the core building block, the entire system is decentralised, so nobody controls it. With the discovery of web pages made frictionless, we’re excited to see what kind of next generation experiences developers build on top of the web.

The project is, of course, still in the early stages and has a lot of development to go through before it’s seamless. On top of that, Apple’s iBeacon is a new technology that also uses Bluetooth low energy signals to alert apps when you approach or leave a location. Although it does have the ability to estimate your proximity to a checkout counter in a retail store for example, it utilises the app, which is exactly what Google’s Physical Web doesn’t want to do.

It’s when it comes to retail though, that Google’s Physical Web could really grow into its own. For example, a customer standing next to a rail of clothes could see those clothes in motion through video. Or, they could find out what colours, sizes and styles a jacket comes in, as well as other items to complement the look. They could even use it to direct themselves straight to the item they’re looking for in a huge, confusing department store. Thinking outside of fashion-led spaces, the idea can be extended to art galleries for information and food shops for product’s nutrition values.

However it’s used, there’s no denying the opportunity to discover content and deliver quality is there. With developments constantly underway, from keeping proactive, irritating notifications to a minimum to perfecting that search result ranking, we’re looking forward to seeing what’s next for Google’s Physical Web.

What are your opinions on Google’s Physical Web, and how do you think you could harness it to enhance not just a retail space but an all-round customer experience?