Forget everything you think you know about hair salons. Described by owner, and celebrity hairdresser, Ricky Walters as “the Soho House of the hair and beauty world”, Salon 64 has moved the needle for the entire hairdressing industry since it opened last year.

The space deliberately doesn’t look like a typical hair salon, but something closer to a cool bar. Instead of bottles of product and hair dressing tools on display, there’s fire pits and marble work stations that open up for a touch of theatre. Clients’ hair is washed in a private room rather than in full view of everyone.

There’s an in-store bar, coffee space, make-up station… it’s a space to socialise, whether you’re getting your hair done or not. We spoke to Walters about rewriting the rules of what a hair salon should be, and why that included looking all the way back to 1664 for inspiration:

Where did the idea for Salon 64 come from?

It was from the clients themselves. At the time I was based inside the five-star hotel Corinthia, and when you talk to 10 people a day five days a week you very quickly start to notice patterns of behaviour and people asking the same questions.

The number one question that every client asks, I think probably in every salon in the world, is ‘do you have a phone charger?’ The next question is ‘can I stay and do my make-up in your mirror because I’m going out?’ And then the third question is ‘can I bring my friends with me because I haven’t seen them in ages, but I really need to get my roots done and I don’t have a lot of time?’

It was these questions from my clients that provoked me to think about what we could do to solve these problems. Never has a salon ever been invented that had a solution for all of that.

When we were creating the concept we started to ask questions about who came up with this idea of a salon in the first place and what did it resemble? The first time the word salon was used was in 1664 and it was a big opulent living room in a French mansion where the owner would take ladies to get ready before dinner, have some drinks and start their evening.

We had to look all the way back to 1664 for that and started thinking about how we could bring this concept back. That’s why we’re called Salon 64. At the same time being based in a hotel and walking through the lobby I noticed there’s this almost third space that people are using. Some are working on their laptop, some are there for afternoon tea, some of them are powdering their nose and I just wondered what would happen if you almost blended those two concepts together.

In this day and age people don’t just want to come into the hair salon by themselves, have their hair done and then go home. Nine times out of ten they’re probably going out somewhere nice afterwards which is often to meet friends. We’ve just fast-tracked that sort of social experience and said ‘why don’t you come to the salon and do that together?’

Were there any surprises about how the world responded to the space?

People’s curiosity. I didn’t know how it was going to be received when we opened the doors. We’ve invented a salon that doesn’t look like a salon. But what I’ve noticed is that people just stroll in and then they say either ‘what is it?’ or what’s even more interesting is they just start guessing like ‘oh it’s a Japanese restaurant, it’s a members club, it’s a hotel.’

Then they’re really excited to hear the story of where it comes from, why we’ve done it. They learn a bit about the brand, they take a price list and walk away. Then they’re sitting at home and waiting for their next haircut, so they can come in and actually experience it.

Could you explain the concept of your flip-top counters?

We call them jewellery boxes because the design is inspired by a traditional jewellery box. It’s split into different sections for your phone, for your jewellery, we’ve got holes cut in them that fit our cups and glasses.

They’re definitely an interest point. People walk in because they want to see them. I think it’s more about what the counters represent which is doing things differently. Typically, hair salons have looked the same throughout the ages; mirror, chair, mirror, chair. We have a salon that looks as much or as little like a salon as we please. 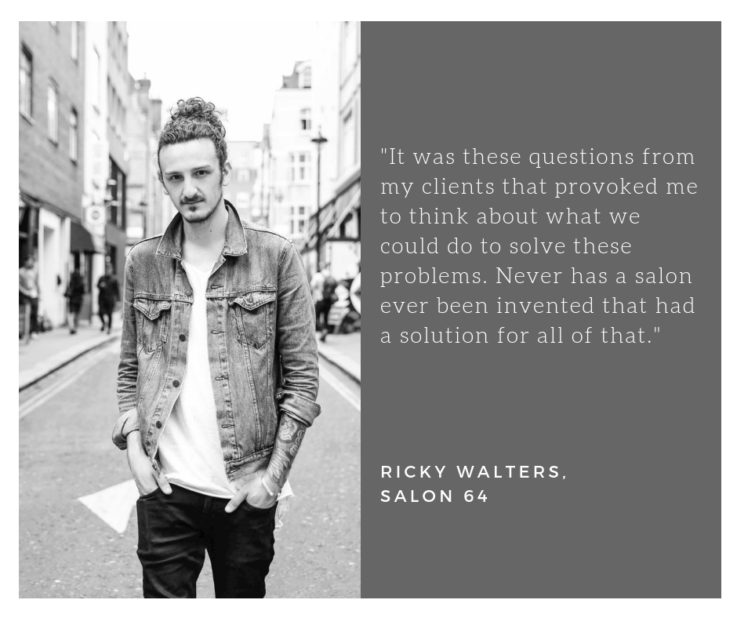 Has the social nature of the space changed how you hire staff?

Hairdressers are quite a social bunch in general. We enjoy talking and meeting new people. You couldn’t do this job if you didn’t. In terms of finding my team I’ve never advertised for a position. I go out on Instagram and I look for the very best hairdressers that I can find.

I look for their own independent style; something that makes them stand out. I look at the amount of followers they have, what work they’ve been doing, where they’ve been working. It’s the same as if you were to browse through a CV but I think you just get much more information from an Instagram page. Then I contact them, and we meet and we go forward that way.

Do the hairdressers work full time at Salon 64 or elsewhere as well?

We’re a completely mixed bunch. Some of them are based here full time as employees. Some of them do a lot of photo shoots or magazine work. Some of them may be winding down and just want to do one day a week and keep their clientele. The thing that follows through is that I have either known them already within the industry or gone out and seen their work and thought that I’ve got to have them based at Salon 64.

What type of people choose your services?

We’re seeing a real mix, but it’s probably 70:30 in favour of the ladies. We are noticing a bit of a consistent pattern around 25 to 35 year olds. They’re quite big on Instagram. They gain all their insight on what they want to go to and see around London through social media. They will often take pictures of the salon. They’re young professionals that are doing quite well. People that just want to have a bit of a good time and a nice atmosphere, but also enjoy the finer things with a bit of luxury.

How do you run the coffee and cocktail side of things?

We’ve teamed up with a gin distillery called Kew Gin and they have mixologists that are based here Thursday, Friday and Saturday and run the bars on our behalf in conjunction with our reception.

On the other days, myself and two of the other guys make the coffee throughout the salon. We’re big coffee fanatics so we went on a training course to be baristas. We’ve also created our own coffee blend with Vagabond that’s roasted for us in North London. It’s available to purchase so customers can have Salon 64 coffee at home. We also do takeaway coffees.

Do the drinks make a difference to revenue or is it more about differentiating the offer?

It’s definitely not our main revenue driver. We make our money through doing hairdressing services. If you look at the prices of a full head of highlights compared to a cocktail, it’s two different revenue streams. For us it’s more about the added level of luxury and convenience that it gives to our clients. It’s more about the brand and what it represents and just that people enjoy having them rather than what revenue it brings.

Do you sell product alongside the services?

Yes we do. The main controversial thing is that we don’t keep shampoo on display at all. All our retail is kept behind wooden doors, so it’s purely about our recommendations.

The main reason for that is if you are coming in just for a cocktail or a coffee you don’t want to feel like you’re sat drinking it in that kind of naff 90s salon with bottles of shampoo up against the wall. I personally don’t think it impacts sales whatsoever.

Have you seen any trends in terms of how people are selling products in salons?

I’ve always felt hairdressing salons in general have never changed or kept up with other industries. I think that is also the same with how a hairdresser sells products. There are other industries out there that are much better at selling things.

We’re still doing things the same as we did in the late 80s and 90s because hairdressing really is passed down from generation to generation. An older hairdresser will teach an apprentice and then that one will teach the next apprentice.

I think it’s quite incestual and everyone just looks at each other – all these salons are looking at other salons and other hairdressers. For a creative industry it is quite close minded. I like to not look at other salons whatsoever.

What have you learnt since opening Salon 64? If you were to start again from scratch is there anything that you would do differently?

I think you can’t overthink things; you can’t sit down and write a business plan and say ‘I’m going to stick to this’. There is an element of going with the flow and seeing what happens. I think it’s just staying true to the brand and what you believe. We’ve set out to try and reinvent hair salons. We’ve said ‘this is the direction we believe it’s going to go in’ and I think you have to stick to that regardless of what other people say.

I would never do anything the same again because I think you have to keep reinventing. This is a test bed of what could be and what’s yet to come. We do plan at some point to open another one and it will be completely different to this one. We need to push and progress the industry even further.

What are your plans for the future?

We want to put our stamp on the industry. My dream is that in a few years you’ll look back and say ‘do you remember when you used to go to a hair salon just to have your hair done and now they’re like bars and that’s where you hang out?’

We opened our doors a year ago and said ‘this is what we believe salons should look like’. I think there’s still a lot of work to be done to change people’s mindset of what a salon does and the services we can offer. But in hairdressing that’s just one tiny part of things.

There’s the hair product world, which is massively oversaturated, the hairdressing techniques and trends side of things and so on. I think we want to continue to innovate and push salons to meet customer needs that they aren’t currently.

I also think there is a massive connection and synergy between hair salons and hotels because we both like to provide luxury services. I would like to personally see Salon 64 teaming up with some of these big retail or department stores to provide interesting hair services.

Find out how we can help you identify and discover the breakout trends in offline and online retail that will put you years ahead of your competition. Get in touch here.