Smooth sailing: Rough Trade’s Stephen Godfroy on why bricks and mortar is at the heart of the business 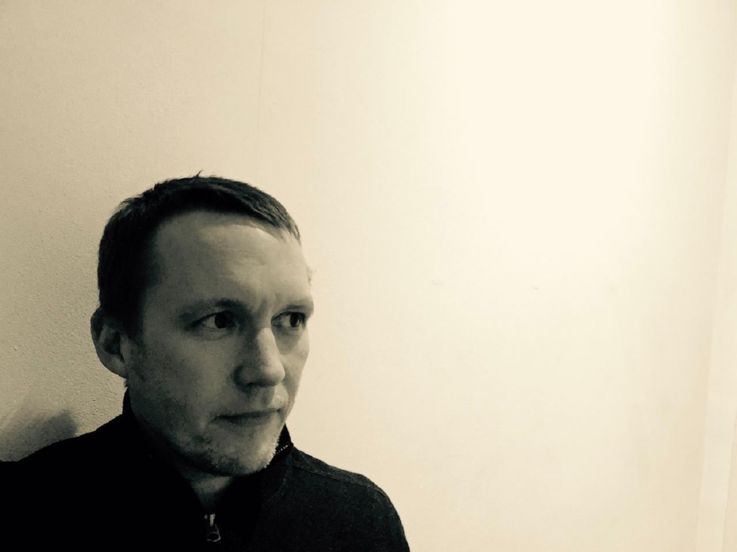 Rough Trade is something of a miracle – a store selling physical music that has not only survived the financial crisis, digitalisation of music, and rise of Amazon – but positively thrived. Rather than competing on price, Rough Trade is a bastion of staff that deeply care and know about the music they are selling, but without the clichéd superior attitude.

The stores are far more than just selling spaces for CDs and vinyl. Each one is uniquely designed, but all exist as hangout locations with gig space, bookstores, brand collaborations, photobooths and listening pods. Faith in the brand is so high that Rough Trade even had a subscription service, sending paying customers unknown new releases purely on the basis of their recommendation. Not bad, when other music stores were struggling to get customers to buy music they knew they wanted!

We interviewed Stephen Godfroy, Director of Rough Trade, to find out more about how to flourish in a challenging field. 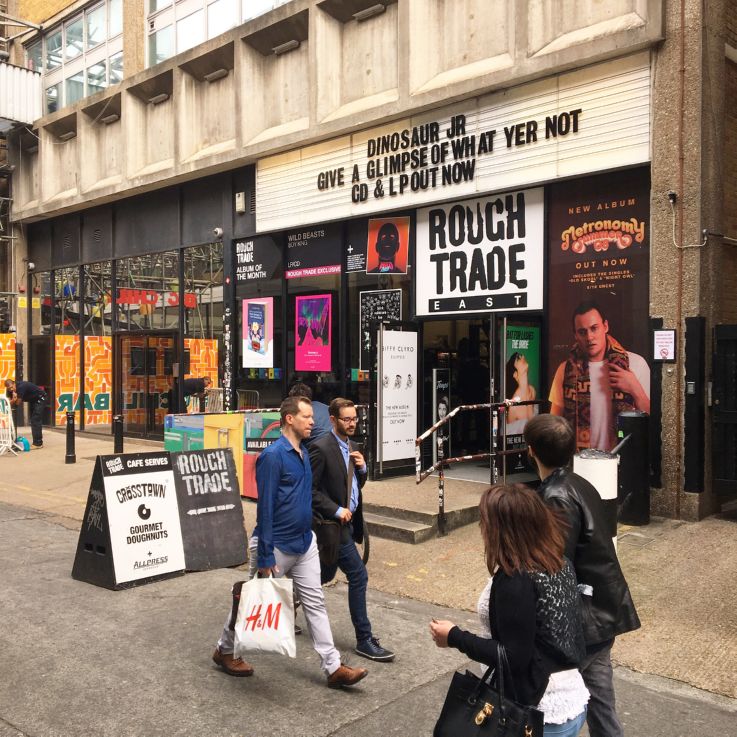 Rough Trade has evolved massively as a company, but seems to always have had a bricks and mortar store at its heart. Can you tell us about the importance of that to your brand?

Rough Trade began forty years ago as a small West London shop, where it quickly became known as much (if not more) for being a meeting place where emerging artists/musicians would congregate, as it was for being a shop that sold brave, exciting new music. So bricks and mortar stores are an integral part of Rough Trade’s DNA, with our stores very much destinations that provide not just serendipitous browsing of exciting, curated releases, but also an atmosphere that is conducive for hanging-out with like-minded people.

The spaces are exciting and sensory, without being overwhelming. Did you deliberately set out to create a kind of ‘third space’, and how does that help you as a record store to thrive where others have been failing?

Yes, back in 2006 when planning Rough Trade East, we decided to recalibrate modern expectation of what a record store can be. We wanted to return the record store experience to a place where people hang-out, combining what many purists considered to be conflicting ingredients – independent store sensibility with a big, expansive interior. To successfully achieve this, we looked at our own history, but also researched third-place concepts such as Seattle coffee shops and Victorian Gin Palaces.
As a business, we have the minds, history, authority, artists and customer relations, that all work together to help us differentiate from competitors. So we’re a bit of a freak in some respects, capable of championing the unknown and to take risks where others may fear. 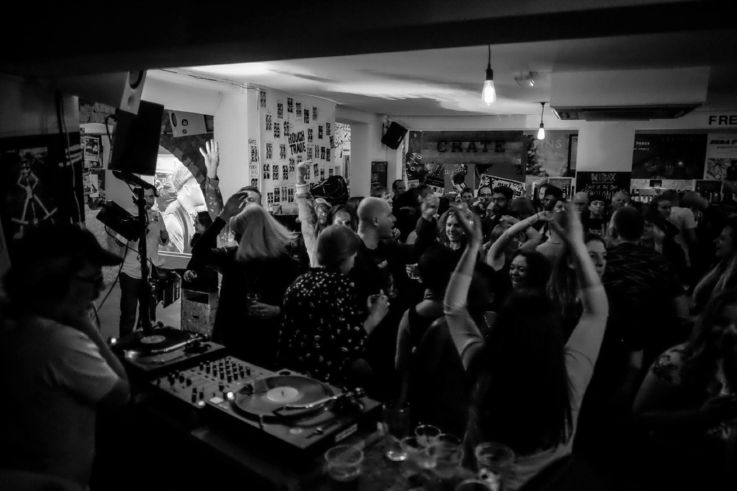 What’s the relationship between the gigs/events and the store spaces? Do the gigs pay for themselves or are they leads to the store?

Our in-store performances are a great example of our overall aim, which is to the narrow the gap between artist and audience. Excluding Rough Trade NYC, our UK stores are not formal venues, yet they have incredible venue quality sound, so we’re able to create intense, intimate and intoxicating live experiences that feel like being at the centre of the music universe. Typically, all our gigs are free with the purchase of an associated new release, e.g. the first 300 customers to purchase (a mix between online and over the counter) the new album by the artist get to attend their forthcoming in-store performance (later that evening/week/month). 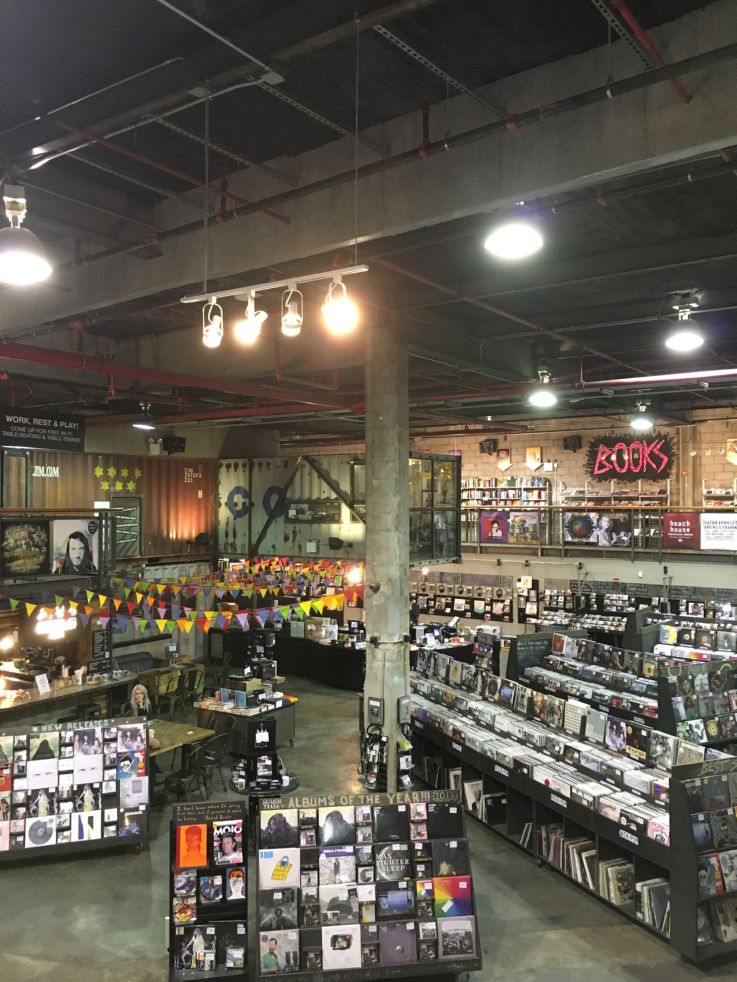 The New York store (which we are obsessed with) is very different to Rough Trade East, and the Nottingham store is different again. How do you design a strategy for these different cities and their spaces? Do the customer base expect or want different things from the stores?

Foremost, Rough Trade is a place that celebrates and introduces the most exciting new forms of creative, innovative music self-expression. With this as our ‘spine’, we then acknowledge the wider aspects of culture that fuse with it, widening our celebration of self-expression to embrace everything from DIY technology, fashion to literature. As to how we interpret this in each location is very much down to the location and the building itself. With Rough Trade NYC, it’s a warehouse space beside the East River, so using old shipping containers to create the interior spaces (inspired by our friends at Freitag) seemed the fitting thing to do. With Nottingham, a 3-storey Victorian building with multiple rooms enabled us to create more delineated stores areas to the extent we can include a Ciguë designed ‘chemistry-lab look’ Aesop store on the second floor, sat above a 40 cover bar/cafe floor, which sits above a ‘traditional’ music and book store on the ground floor.Each one of our stores is unique, adding to the overall destination status. Yet they each retain what is hopefully a peerless selection of exciting new music, introduced by staff who are not just there to work the tills but, more importantly, are knowledgeable and personable enough to become trusted advisors with whom to share an excitement for the music.

Now you’ve opened the New York store and tested that model with the larger event space, if you were to relaunch in London would you want a similar design?

If we opened a new/additional store in London, in addition to the music, whatever else contained would somewhat be informed by our stores-to-date, but also purposefully different, reflecting the nature of the building itself and the surrounding neighbourhood.

The website is more than just an online marketplace. How do you see the relationship between your online and offline spaces? What’s the difference in revenue between the physical store and the website?

An entirely new web platform is due to launch any day! Over the coming weeks, we will be rolling out a new UK-based webstore, and for the first time, a new US-based webstore. Both will largely mirror the other in structure, but the content will differ to reflect regional variations, whether that’s product and delivery options, or how we integrate with local partners.Alongside the e-commerce platform, we also have a new editorial platform that weaves online and offline together, using a new monthly magazine which we produce ourselves (64 pages/month), a new series of podcasts (recorded in our new London podcast studio, inside Rough Trade East – where people can see shows being recorded), and our new YouTube Channel, that features original programming, not just highlights of some of the in-store performances. It might be our 180k Twitter followers being kept informed of new editorial content, or a newly announced in-store gig, or clicking and collecting at any of our stores, to reading an article in our monthly magazine. Any of these online elements may compel you to purchase a limited edition vinyl album via our (new) mobile-friendly webstore, we aim to fuse offline with online customer engagement in a seamless, fun, relevant and often pleasantly surprising manner. 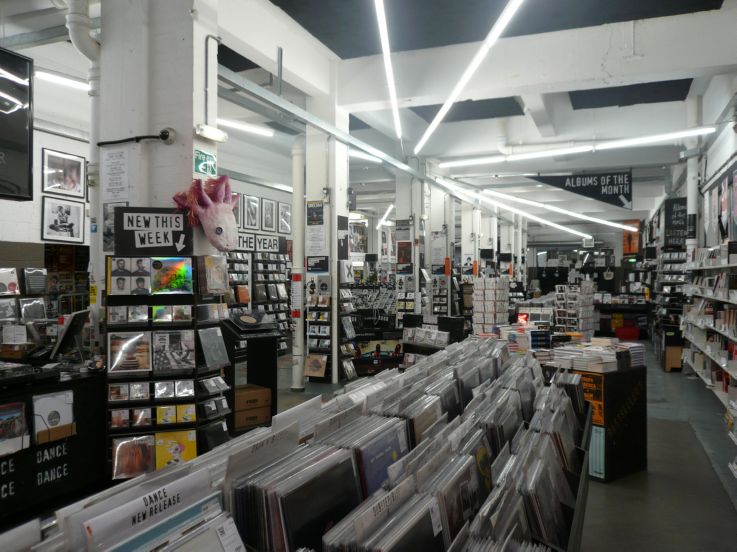 Rough Trade spaces are fairly low tech, and you’ve said that you built the stores on instinct and feedback from the trade and public, not metrics. Do you use any new technologies or data systems within the stores to inform your strategy?

In a very transparent and gentle manner, our new/forthcoming Membership package for customers will help us better understand our online and offline customers. Alongside, for the first time in our history, our new IT system (from till systems, product database, customer database, front end web, etc.) will unite each aspect of our business (globally) to produce sets of data that will enable us to not just dramatically improve our operational efficiencies but also our customer offer. Suffice to say, we’ve spent the last 18 months focusing and
investing in our internal IT-based abilities, readying ourselves for scaling the business domestically and internationally over coming years.

What do you think retailers need to do to evolve with the times rather than being swept away?

Invest in IT infrastructure – unite as many parts of the business as possible. Invest in people – providing staff not just a job but a career and sense of belonging.Invest in the unknown, to experiment – to create a model that embraces change, that allows you to experiment with the offer, to creatively express your brand values, to emotionally connect and influence by discovering tomorrow’s currently unproven, unknown, talented suppliers. 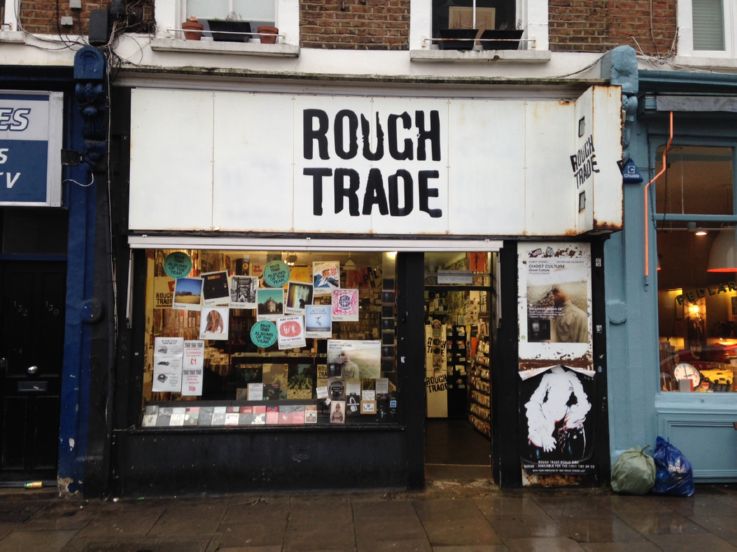 What have been your biggest learnings?

As a business, due to our unusual market and market positioning, we often have no precedent to follow, which ensures our uniqueness but also makes for a long and steep learning curve. Needless to say, there are so many important learnings, but opening Rough Trade NYC was unquestionably the most condensed period of learning for me and the business – an incredibly demanding, complex process that took four years and remains ongoing post-launch (opened Nov 2013), albeit to a less intense degree.

What are Rough Trade’s plans for the future?

Right now, our focus is very much on ensuring our new IT systems, online and editorial platforms are all successfully integrated, giving us the consolidated foundation on which to open further stores in the UK and globally, starting in 2017.

Which three retailers do you find most exciting at the moment?

To see more inspirational stores like this one in the flesh, enquire about our London, New York and Berlin retail safaris here.