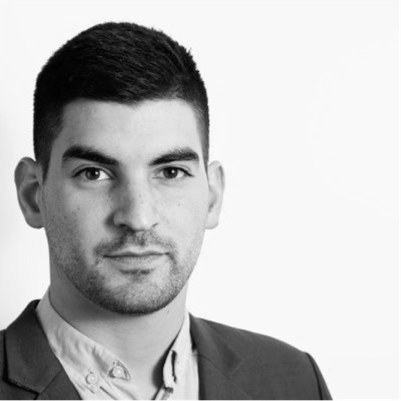 Cameron Worth is founder of SharpEnd. Describing themselves as “the agency of things”, they are dedicated to helping consumer brands embrace the Internet of Things (IoT). He talks about its importance in creating retail experience and just how it’ll transform the supermarket of the future.

Can you explain what you do in a nutshell?

To start with, there are two ways to look at the Internet of Things. One on the operational side – making businesses smarter and more efficient by connecting stuff.

Then there’s the other side of the Internet of Things, which is focused on consumer value and new touchpoints – creating new connections and building more value with consumers.

What we do as SharpEnd is provide guidance to brands around the Iatter. What does the IoT mean for your brand? What does it mean for your consumer? What are the things that you have license to do as a brand in connected environments? Most importantly, how do you adopt robust and credible processes into your experimentation? So that’s really what we’re trying to do. We’re tooling the industry to be able to have more informed conversations and know what they really want out of the IoT. The Internet of Things is not a website, it’s not a social media thing, but it’s actually an enormous opportunity to instrument the real world. So we see the Internet of Things as the next platform. And the role of specialist agencies and the emergence of new platforms is a very well-trodden path.

Can you give us some examples of some of the work you’ve been doing? What are you really excited about?

Our clients include Pernod Ricard, Unilever, Beiersdorf and the Absolut company.

We focus on two main areas as a business. The first one is ‘Smart Packaging’. For example, we’re looking at connecting consumer goods at scale with Absolut Vodka. They make over a hundred million bottles every year and that’s an opportunity to create a hundred million new consumer connections through those bottles. Firstly, you need to start understanding more and more about how those bottles are used and bought. Who buys them and what they’ve done with them post-purchase. We work across a range of different technologies and think a lot about what technology on-pack is right for what market. Designing trials and running pilots is really exciting and critical to ensure success.

The other area of business that we focus on is ‘Smart Spaces’. It’s not just activating the products but also activating the space around them. While you are able to put tech like NFC onto the label of a product, you can also embed connected technologies into the space around it to drive new types of interaction experiences. The main split between the two focus areas is that packaging uses passive technologies generally and with spaces we’re generally working with active technologies. You can either explore the two opportunity areas independently or together – so not just thinking about the role of the smart product but also how it behaves in various smart spaces.

If SharpEnd does its job well, we will move the industry past gimmicks and into large-scale deployments of useful and brand-building technology implementations. Once we’re able to do that, and once brands deploy scalable applications that make positive differences in people’s lives then obviously that’s a good thing for everyone. 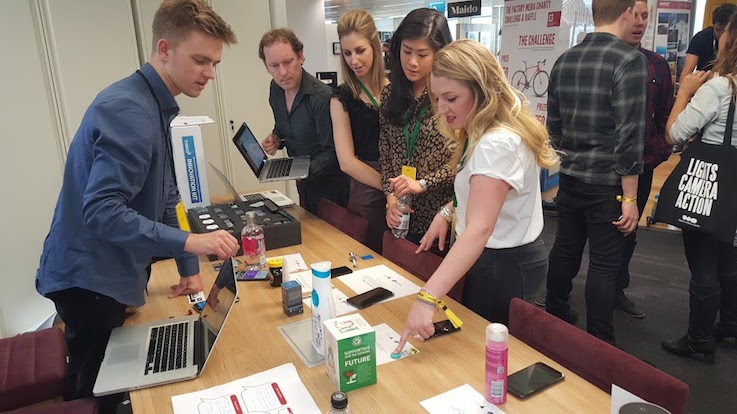 Everybody is talking about the connected fridge. Do you have a feeling as to what the world’s fully connected Internet of Things could look like?

We have to have an opinion – whether we’re right or not. The future certainly doesn’t centre on a bloody fridge! We’ll find out in a couple of years, but the future is definitely not about messaging and finding more ways to beam logos at people. Devices are getting smaller and smaller. We are actually moving into a world where the interfaces will disappear and services are going to become invisible. The “things” are going to happen around you and they’re not going to have any screens, so you have to ask yourself where the brand logo can be thrown at people in this sort of world.

Do you have a vision for how the Internet of Things will change the retail experience?

There’s certainly a lot that can be done in retail, and we’re working with our brands to look at mainly service-focused experiences in-store. With the brands we currently work with the two key areas are supermarkets and travel retail environments. The former requires quick, sharp engagements whereas travel retail can be a little more focused on overall experience (owing to a longer dwell time).

A supermarket is a very functional thing. You want to get your stuff and get out as quickly as possible. Realistically you’re not going to stand there responding to beacons, scanning 5,000 products and sharing your fantastic aisle experience on Facebook. The overall ‘brand’ piece can be done after the purchase when they’re back at home but, in-store, it’s more about making people more incentivised to buy your stuff. So I think making the supermarket experience much more functional, much more frictionless is a good thing and I think the Internet of Things will definitely help in wayfinding, as well as accessing store-specific promotions. From an operational perspective inventory management has already shown massive gains for businesses using the IoT.

We don’t yet work with a Burberry-type client (large brand experience stores), but they have certainly put a flag on the ground with regards to the Internet of Things and how it can optimise the retail experience. Even though they’re not working with us – we’re only a call away Mr Bailey! – it’s still great for us to see brands using the IoT properly and thinking about it in the right way. Rather than KFC messing around with connected chicken buckets, which is just hideous! 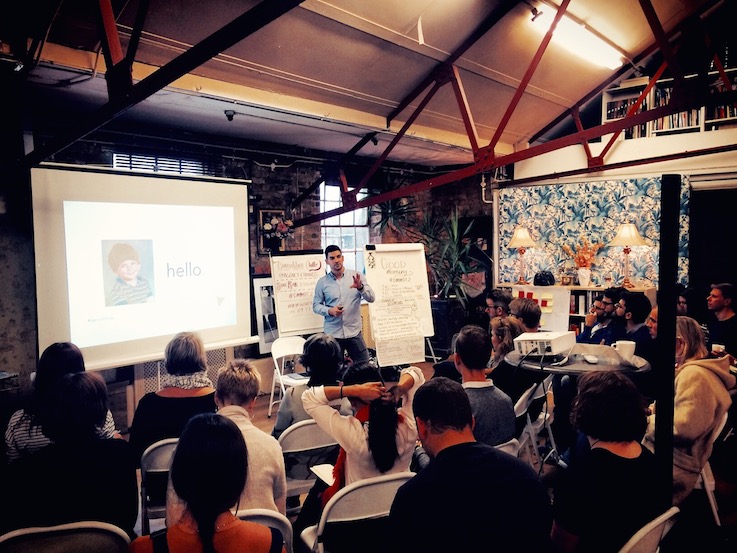 Cameron presenting to a Masters course at Hyper Island

Is it about getting more reliable data about what’s going on?

It is, but it’s also thinking about what data you need and why. Lots of our work is around creating data strategies. If you look at the connected home, for example, it’s forecasted to generate a hundred and fifty million data points a day. Helping a brand figure out a) what the hell are these data points and b) what is important is key. If we’re looking at the ‘connected bar’, is it knowing what drinks do people prefer or is it how long do they spend in there? Or is it where are they going afterwards or is it what they drunk before they got there? That’s really what we start doing as well, which is why SharpEnd goes from strategic consulting (big picture stuff) to program management of prototype, pilot and scale programs.

When do you think these ideas will all be in the mainstream?

I don’t think it’s appropriate to put a year on these sort of things. I’m still waiting for the year of mobile, for example. I think it comes down to showing brands how they can transform to play a greater, and more important, role in consumers lives by being more contextually relevant. This is going to be key to driving the changes in behaviour for this to become a ‘mainstream’ thing. I think it’s interesting to look at the contactless payments and just see the change in behavious around that. People now get annoyed in a place where they can’t pay contactless – WTF Sainsbury’s?! – because they got used to it so quickly. That literally took weeks, and it was because the service was so valuable. The question for brands that make millions or billions of things is “why would people want to engage with this product? What’s the necessary value exchange?”

What is your opinion on privacy, and sharing of data?

Do you know anyone who left Facebook as a result of the Snowden revelations? I certainly don’t, and people were explicitly aware that their data is being misused. If a brand is using data and applying it intelligently, I don’t feel there shouldn’t be an issue with it. I’m also a big believer in brands being more transparent about their data policies. I think this is going to become more and more important as the engagement with end-users gets more and more personal. Any devices or products in the home definitely need to think about how they communicate to people what they are and aren’t collecting and also why – “What’s the purpose of you getting this data from me?”

And do you think the smartphone is going to be as critical in our lives going forward?

Well, if you look at the reports on smartphone usage, sending messages and making calls generally are not even in the top five. So you could argue that a smartphone is more like a computer in your pocket. Do I think smartphones are going to be critical looking forward? I definitely think the functions of a smartphone are, but the forms are going to be different probably.

What other companies or agencies or thinkers that you really look to that you find really inspiring?

I try and spend a lot of time with older people that have been working in the industry much longer than I have – particularly old-school branding experts. I like hearing stories about how they have seen the roles of brands change over the last 20 to 30 years – particularly upon the emergence of digital. I pick up a lot of my thinking from conversations like this. I think that smashing technology expertise and old school branding methods together can be quite interesting and it always makes for an interesting discussion.

What people or companies in other spaces do you admire and think are doing really interesting things?

Two fairly obvious ones, I’m afraid, but perhaps for different reasons. The first one is Amazon and their misdirection tactics. For example, the Dash button. Everyone was talking about the ‘thing’ itself, but actually it was a prelude to their Dash Replenishment Service – which now aims to embed itself into the actual appliance. It’s really interesting actually the way they can throw things out there – like the button – but actually all the interesting stuff is happening on the backend, like the replenishment platform. Every single time you get the “why did I not see that coming?”. Or at least I do.

Then, from an ‘IoT and brand’ perspective, it’s fairly obvious one but Nike. They completely transformed their relationship with their customers through embedding a tiny bit of the technology into their shoes. Consumers are essentially building Nike’s brand by telling everyone how fast or far they ran that day, powered by Nike.