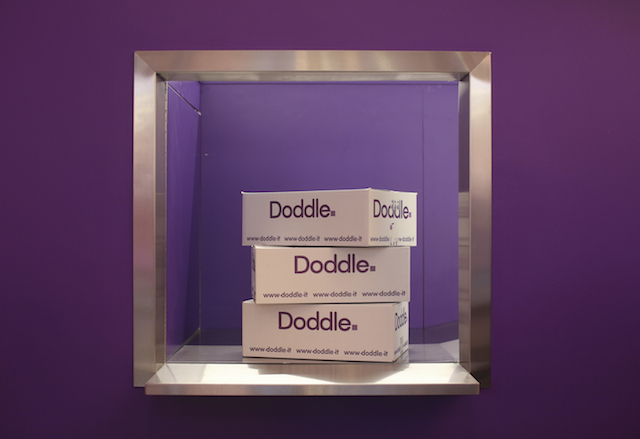 With the increase in shopping online, the challenge becomes delivering goods in a way that matches this convenience, making delivery innovation one of retail’s hottest topics. We spoke to On the dot last week, but one of the best known options for consumers in the UK is Doddle, recognisable from their distinctive purple stores that can often be spotted at train stations. We spoke to Tim Robinson, Chief Executive of Doddle, to find out more. 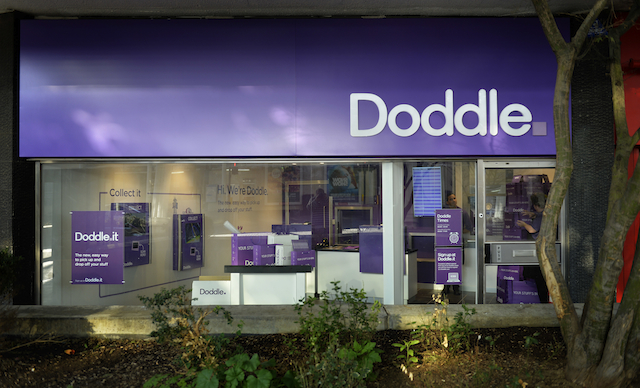 Tell us a little bit about Doddle

Recent years have seen massive growth in online shopping. But the parcel couriers still tend to deliver between 8am to 5pm – the hours when most people aren’t in. Doddle is about giving people a choice to receive their deliveries at a time that’s convenient for them. Our stores are in locations so that they can get their online orders delivered to a store near their home railway station, or close to where they work. It’s about eliminating the dreaded “sorry I missed you” cards.

How does this work in practice?

We work in two ways. We work in partnership with a number of brands, including Amazon and New Look, where we’re listed as a collection option at the checkout. By the end of 2015, we hope to have over forty retail brands as part of this integrated offer.

However, we also offer a membership scheme called ‘My Doddle’ so that people can choose to use Doddle with any retailer. You can sign up for free with no commitment on a pay as you go basis or opt for Doddle Unlimited membership and only pay £5 per month to have an unlimited number of deliveries sent to Doddle. At the checkout, you enter your Doddle account number beside your name, and the address of your chosen Doddle store.

You’ll get an email or text, or a push notification from the app to say when your parcel has arrived. You walk in, your barcode is scanned and you’ll be on your way with your parcel in two minutes, much quicker than having to organise a repeat delivery. 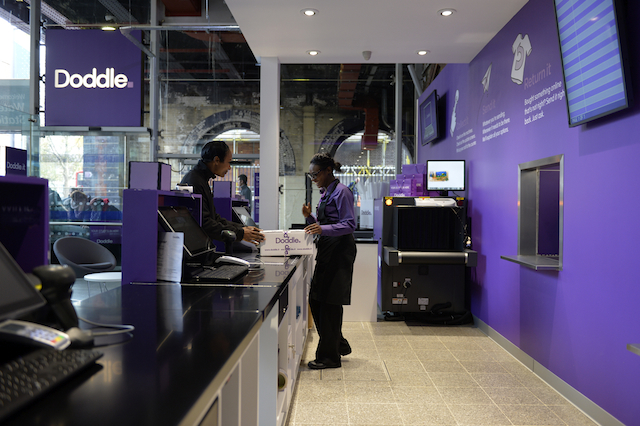 What makes you different from other options?

There’s a lot of innovation taking place in click and collect at the moment, generally driven by individual retailers. At John Lewis, for example, you can only pick up deliveries from John Lewis. Doddle means you can get all your parcels – regardless of sender – delivered to one place.

With our stores in railway stations, the shops are also on your way – they’re in locations that are already part of your day-to-day routine. Location is a really important element to the service. Network Rail is a shareholder in Doddle – so our stores are in and around the busiest stations, with thousands of people passing through each day who aren’t at home to receive deliveries.

Our stores are also specially designed to make it quick and easy to collect and send parcels. Unlike other offerings where you might be heading to a greengrocers to pick up your parcel, our stores are dedicated to parcels and our staff are trained to be parcel experts so they can therefore help consumers with all their parcel enquiries.

We differ from the other collection points such as CollectPlus or MyHermes, in that we can accept deliveries from any carrier. Although these businesses have great networks of outlets all over the country, consumers can only use them with certain parcel carriers. 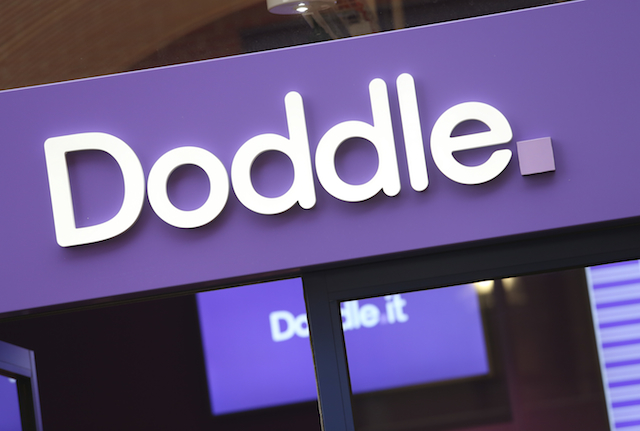 How do your users split between the partnership versus member options?

It’s quite balanced. We’ve got 60,000 members, but a significant number use both routes. Overall, we’ve got around 100,000 customers using Doddle. Because of the time it takes to set-up an integrated check-out with a retailer, My Doddle membership has previously had the greatest usage. But the pace of integration is picking up now especially as we approach the peak period. These partnerships are another way for people to start using Doddle.

John Lewis have recently announced they are going to introduce a £2 charge for orders under £30. What impact do you think this may have?

John Lewis really are the retailers who pioneered click and collect, and where they lead, it’s inevitable others will follow. Charging for a collection is not necessarily bad, but it does raise customers’ expectations. If you are paying for the service, you want it to be fast and professional. You don’t want to be stood queuing in Waitrose because it’s busy.

To run a click and collect service requires additional resources to a traditional bricks and mortar store, and demand for these services is growing all the time. In five years, I think it will be common to see click and collect charges for baskets of low value.

Some of your stores go beyond simply the send/receive model, with changing rooms. How has that been working?

Yes, we’ve been trialling changing rooms in some of our stores. They’ve been met with mixed results over different parts of the country. This may be down to the promotion of the in-store team, or it may be cultural.

For example, in London they’re used less – which might be to do with the pace of life. We have typically built them in stores where we’ve got more space available to introduce them. 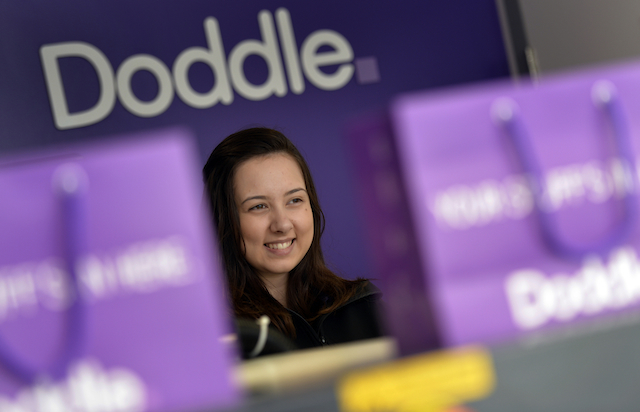 Tell us about some more of the innovations you are trialling.

We’re launching more on demand products in advance of the peak period. At the moment, we’re still trying to learn about our customers and what they want.

We recently launched Runners – people who will come to your home, office or even your local cafe to pick up the parcels you want to send and do it for you. It’s very early days, but it’s very exciting. For it to work, it needs to have the infrastructure close to the consumers which we do with our network of stores and it’s proving to be very popular in urban areas. Services such as these are about making it really easy for people to send and return parcels, which they can now do with just a few taps on their phone.

We’re also exploring building an agent network, where people will be able to act as agents for an area, helping people in their community to send and receive parcels from their own home. We’re trialling this in Bromley at the moment: it’s got the balance of a dense urban area, and a large volume of people passing through to make it a good test area. Plus, we’ve already got a very successful store there. The agent network will become part of the local store team and be managed by them.

Other interesting innovations happening in the area include a Scandinavian peer-to-peer delivery service, Nimber, which is very interesting and launching in the UK. It uses the large number of people already on the move to get things around cost effectively.

Is there a danger you’ll be leaping ahead of what your customers are ready for?

It’s a very fast moving area, with a large appetite for the change. However, we do need to be mindful not to run too far ahead of our customers. Ours is a mass-market model and is about appealing to a wide range of customers. The click and collect model has been around for a while now, so people are more familiar with it and receptive to new offerings. As a relatively new brand, we want people to engage with us, build our reputation, and introduce them to some of these more innovative services.

At the moment, our focus has to be increasing our scale and growing our core network. We’ve been opening new stores in universities for example, which have a huge population of people without the time to wait around for deliveries. We’ll be opening another six university stores before the end of September.

Who else do you think is leading the way in delivery innovation?

DPD are known as a parcel carrier, but they’ve been doing amazing work in introducing choice for their customers in controlling the delivery of their parcel.

In the USA, there’s Postmates, who offer peer-to-peer delivery in urban centres – I’m sure they’ll be landing in the UK at some stage.

Amazon now have the ability to hit deliveries within an hour. They’ve invested so heavily in their logistics, it’s difficult for other companies to keep up. Some people were sceptical about same day delivery taking off but it’s clearly here now and we all have to do it.

And then there’s people like ASOS, who have lots of exciting tech being explored in the background thanks to their incubator labs. I’m sure they will amaze and delight on the back of their existing business in five or six years.

I really think the big players are going to do some amazing things in the next few months and years. It’s an exciting time.