Has virtual reality reached a tipping point for retail? 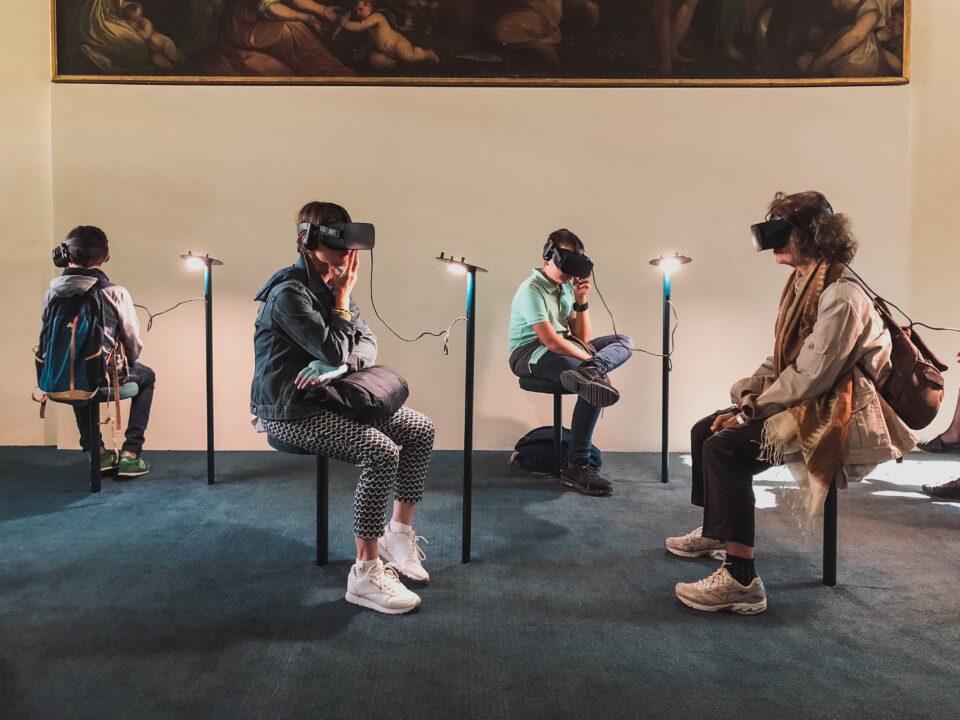 We have never spent as much time interacting virtually as we have this year.

The Covid-19 pandemic has kept people closer to home and key entertainment venues closed. With fewer ways to remain connected to one another, many of us have turned to digital platforms to bridge the gaps.

This increasingly virtual world feels like the ideal environment for virtual reality (VR) and augmented reality (AR) to shine.

Indeed, we have seen the technologies at work enabling users to visit art galleries and exhibitions and take trips to other countries virtually from home. But are they also helping us shop? 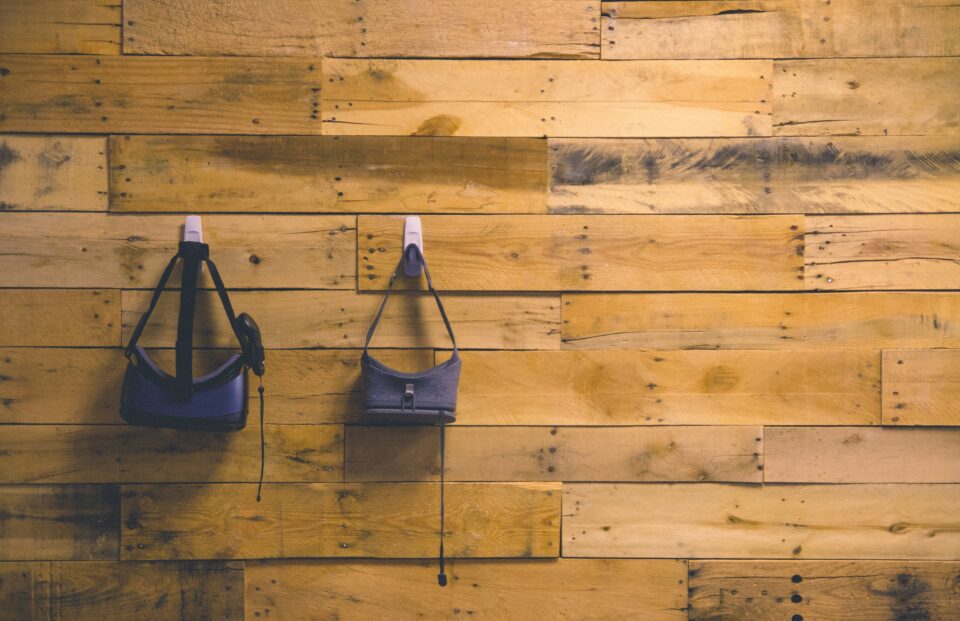 How big is the virtual reality market?

According to Omdia, a technology consulting firm, 26 million VR headsets are owned globally at present.

Statista estimates that 5.5 million VR/AR headsets will be shipped by the end of 2020. It also forecasts that this will rise to over 26 million by 2023.

That would more than double the amount of VR headsets owned across the world.

But then modern VR has only really been gaining a presence in the last 10 years. It will take time for the technology to reach the maturity needed to crack mass adoption.

There’s also an argument to be made that the coronavirus pandemic may have sped up that adoption, which may accelerate VR’s uptake. 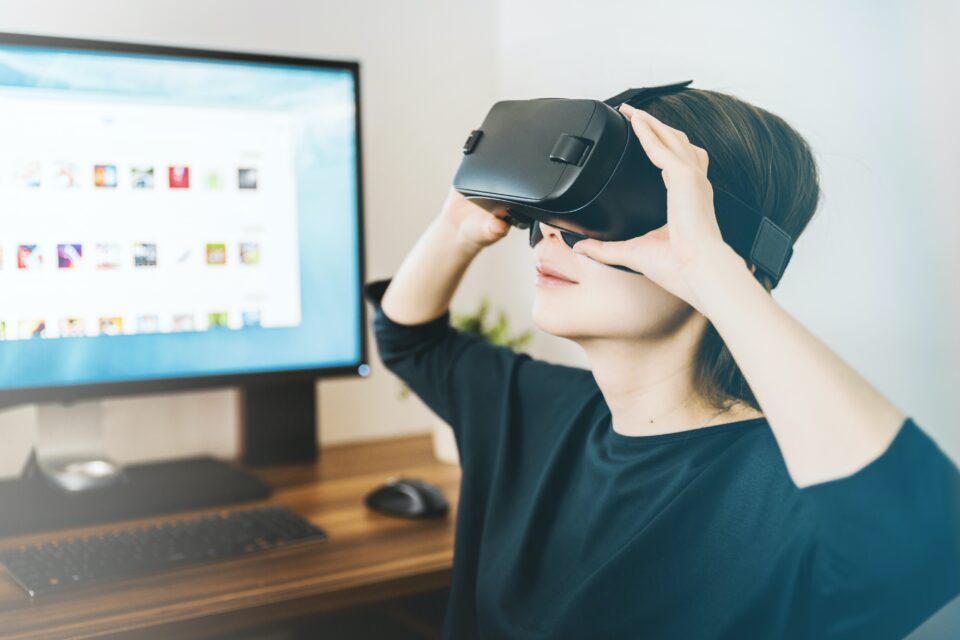 What does this mean for retail?

There are two sides to this.

One is interest from consumers in VR experiences – in particular for shopping. The other is whether VR experiences are fit for purpose when it comes to retail.

1. Is there an appetite from consumers?

A survey by Statista in June found that nearly half of US shoppers surveyed haven’t used AR or VR tech when shopping and have no interest in doing so.

Only 2% said they regularly use either technology when shopping.

Meanwhile, a report by ARtillery Intelligence and Thrive Analytics found that 19% of US adults surveyed have used VR with 31% using it every month.

Honestly, some of this is understandable.

To date VR has fallen into two camps – high-end headsets complete with a high price tag and scrappy cardboard set-ups that you stick your smartphone in and strap to your head.

In the case of the former adoption, and development, has mainly been concentrated on the video game market. This makes sense as the application for VR in games is more obvious. Plus, gamers tend to be early adopters when it comes to new technologies and used to the high cost that come with cutting edge developments.

The Facebook-owned Oculus, perhaps the most well-known VR headset company, was founded in 2012. Its headsets still start at around £300.00 to buy.

Sony launched its Playstation VR in 2016. It currently starts at £260.00 to buy. Valve’s Index VR headset entered the market last year with a price tag of around £900.00. The other major VR player is HTC which sells its VIVE system at a starting price of £550.00 but can go as high as £2,500.00 for the premium model (plus gaming computer).

While this pricing is somewhat understandable due to the investment that has gone into developing the tech and improving it, it is clearly a barrier to mass adoption.

In turn, because the cost prices out a lot of potential customers, VR remains overly focused on gaming and its paying customers which can be another limiter when it comes to reaching a mass audience. There isn’t the economic case to overly focus on other sectors and applications. 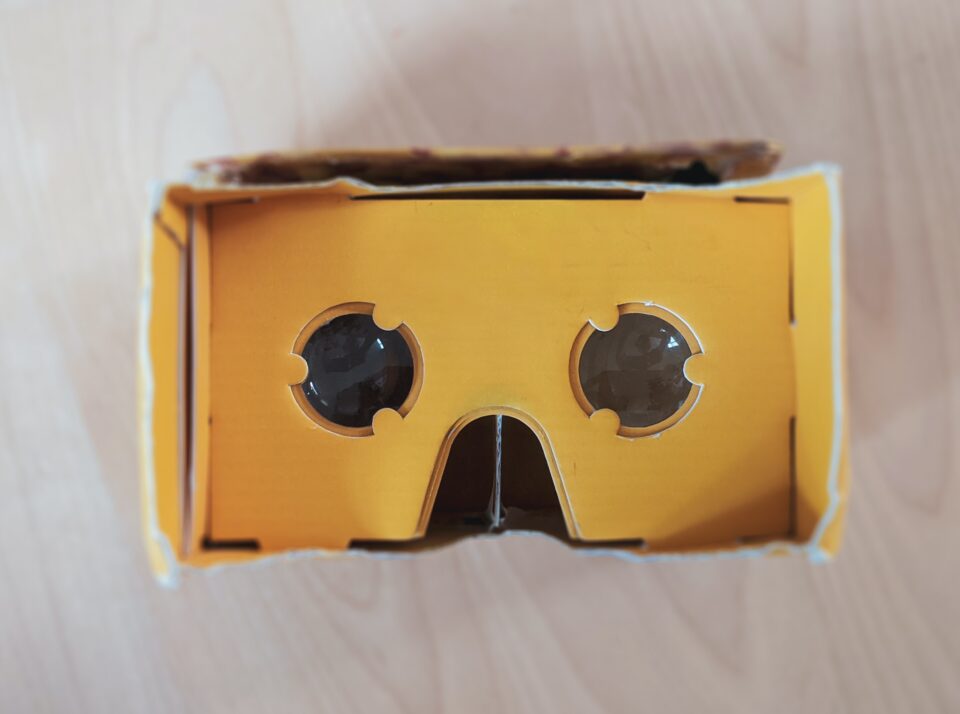 At the other end of the spectrum are the cheap cardboard VR viewers that cost as little as a few pounds and make use of the customer’s smartphone. Google Cardboard is the figurehead for this type of VR offering a wide array of virtual content for users to experience.

While this affordable option has opened up VR to more people, cardboard VR doesn’t provide a particularly great experience which could put people off exploring the tech further.

The biggest problem though for retailers is the push-pull between supply and demand. If there isn’t enough customer demand for VR experiences, then brands aren’t going to invest the time and money to create them. But if the experiences aren’t there then customers aren’t going to be convinced of VR’s merits.

And they need to be convinced in order to invest in the headsets and systems that will give them truly impactful VR experiences.

For many companies the response to this chicken-and-egg situation is to offer ‘soft’ VR experiences that don’t require headsets.

This instantly makes VR more accessible and immediate. Customers are dropped straight in rather than having to spend time setting up their headset etc. The majority of people will choose a low effort option when it is available, so this approach to VR is going to reach a far wider audience.

As consumer awareness of these softer VR experiences grows, we may see interest grow with it. 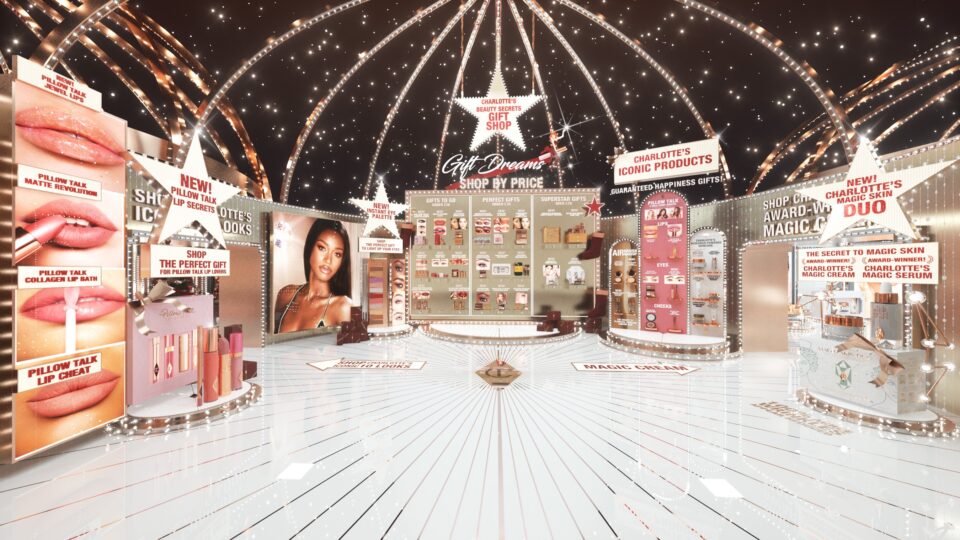 2. What does VR look like in retail at present?

How is VR at work in retail then?

Well, there’s a couple of ways.

The biggest growth is in these soft headset-free VR experiences.

Premium beauty company Charlotte Tilbury is one of several retailers who have launched an interactive VR holiday shop experience. It has teamed up with Obsess, the VR ecommerce leader, to create its virtual shopping space, which it plans to keep long-term.

The result is something that’s a more immersive website experience but not as immersive as true VR. The customer isn’t going to think that they are in a virtual store in the same way they might wearing a headset and moving around. But some of the same elements are represented here.

For example, by clicking, holding and moving the cursor the customer can look around the space, including up, down and behind them. The motion is the same as using a VR headset where you would turn your head to look around.

Navigation around the virtual store is similar to Google Street View with arrows to click to move forward. An interactive virtual avatar of Charlotte Tilbury herself accompanies the customer as they move through the space.

All of the displays are interactive allowing customers to browse products and view additional content such as video. Interestingly, Obsess has provisions to swap out products displayed should stock sell-out to avoid disappointment.

The Charlotte Tilbury Obsess experience functions in much the same way as that – from the navigation to the multimedia elements to the setting design.

Seriously – look up the Dorling Kindersley Eyewitness Virtual Reality Cats game on YouTube (complete with music that is pretty terrifying for a museum exploration game) and you’ll see that we already had the building blocks for this type of VR experience 15 years.

The Charlotte Tilbury experience has of course improved upon it and added in ecommerce capabilities, but the fundamental approach isn’t radically different. 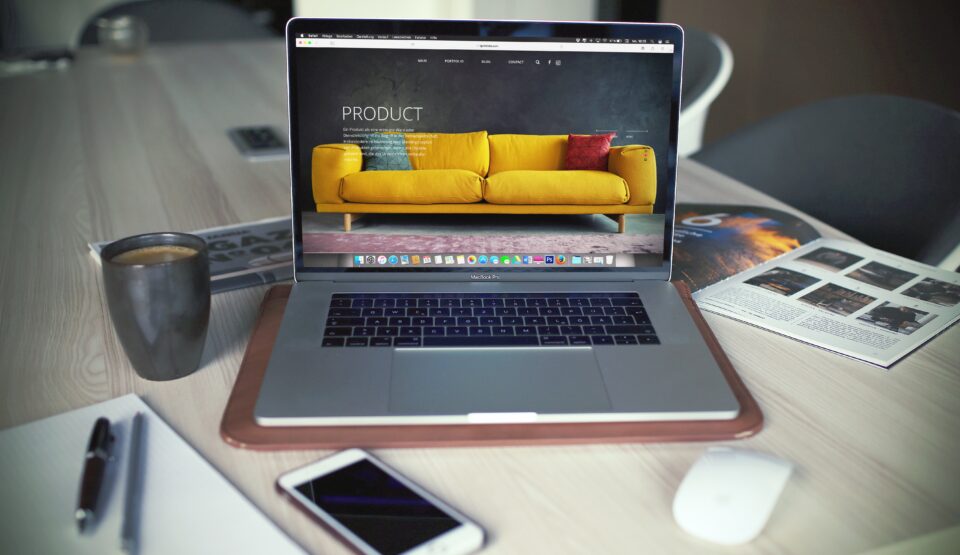 So, is soft VR more convenient than browsing a website?

Potentially. It depends on the shopping journey.

As with shopping in general, if you know what you want it is far faster and easier to just type it into a website and click buy.

But if you don’t know what you want VR stores can provide the more inspirational, visually led browsing experience that we’re used to in physical retail. It’s far easier to discover things that are laid out before you rather than buried in traditional ecommerce search results and product grids.

It also gives retailers the means to differentiate their online shopping presence by the use of different features, interactive elements and look and feel.

What’s interesting about Dolce & Gabbana’s approach is that it recreates some of the real-life stores the brand has across the world. This may not work for every brand but for a luxury name like Dolce & Gabbana, there is something in customers being able to virtually visit and shop the Venice store or the Osaka store. There’s an element of curiosity in seeing those spaces and how they differ.

Customers also don’t buy products outright but can book shopping appointments by email to learn more about items they are interested in. This includes the option to book a video call with staff in the specific store of choice. 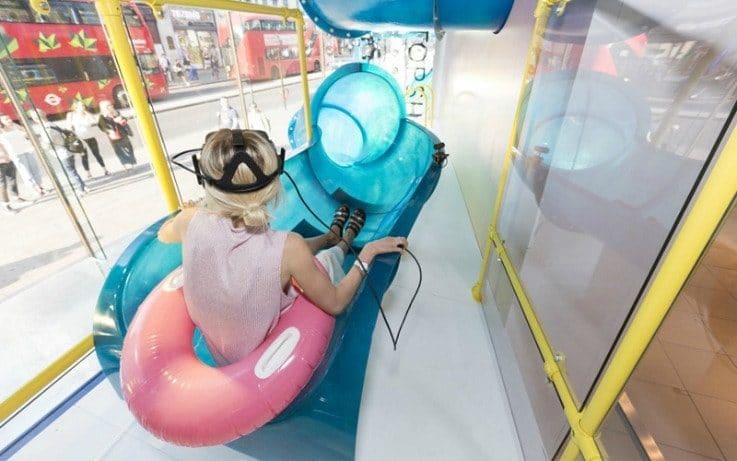 While soft VR maybe the big focus for good reason, other applications of the tech do exist in retail.

This includes in-store activations and installations. One example is Topshop’s store window VR water slide experience from 2017. Customers were invited to sit in an inflatable and wear a headset to ride a VR water slide along Oxford Street.

Experiences like this work because the tech side is taken care of by the retailer. They also give brands the opportunity to do things with customers that they couldn’t in real life (like put a water slide down Oxford Street). VR installations can enable retailers to share information about their brand in new and interactive ways.

The other main consumer application of VR in retail is in services. Last year Natuzzi opened its New York showroom which features a VR experience designed to help customers visualise how their home will look with Natuzzi furniture.

Customers put on a Hololens 2 headset to enter a digital version of their home where they can move furniture around and change the colour of items.

Again, the costly part of this VR experience is on the retailer side rather than the customer one. It also gives customers a much better idea of how their home might look with the furniture in which can help in getting them to buy.

On the non-consumer facing side of retail we’re seeing retailers using VR for everything from designing new stores to training staff. This is likely to only grow. 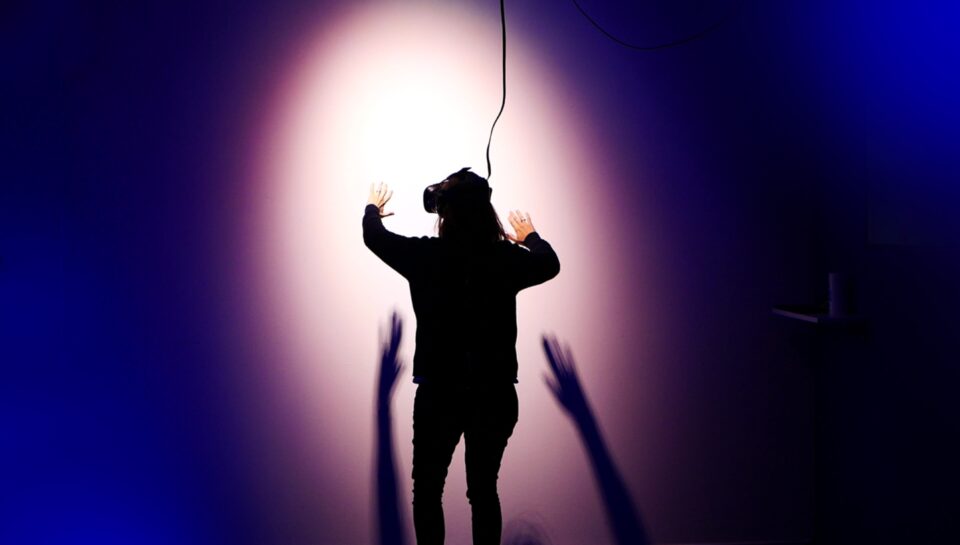 Has VR reached a tipping point for retail?

As a bells-and-whistles VR concept which fully immerses you in a new world via a headset, the answer is no. The consumer demand isn’t there and neither is the right retail execution if we think about shopping in VR.

The best applications of full VR are in-store services and installations which enhance the buying experience for the customer rather than trying to recreate it.

But the simplified soft version of the technology is a different story. More and more brands are embracing it as a more discovery-focused way to shop online that also doesn’t add a lot of complexity for consumers.

It’s this type of VR that we can see becoming a mainstay for the retail industry. And if this softly, softly approach goes down well we may see customers embracing more involved VR experiences in the future.

Talk to us about how you can make VR work for your retail business – get in touch now.