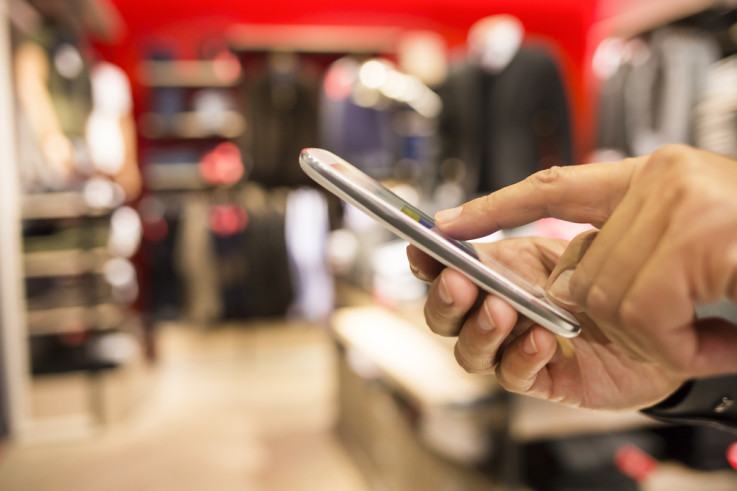 Using Wi-Fi to measure people’s indoor location both accurately and in real-time, Walkbase is a company who has realised brick-and-mortar retail is rich in potential that can’t always be reproduced online. We talked to Ed Armishaw, Head of Customer Acquisition at Walkbase, on how the platform works, and the ways in which it’s shifting retail. 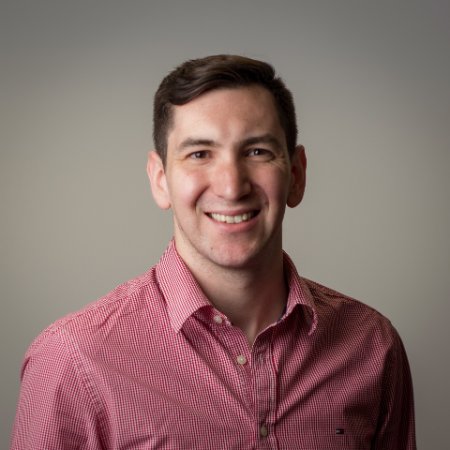 In your own words, what do Walkbase do?

Walkbase started out in Finland and the business is headquartered in Helsinki, which is Finland’s capital. It was started by three course mates who were all doing PhDs and Masters in Computer Science, focusing on indoor positioning, which is using technology to find smart devices to greater or lesser levels of accuracy. They set it up as a bit of a project at university and then turned it into a business.

We’ve been going since 2010. What our technology does is listens for smartphones looking for Wi-Fi. So your phone, if it’s got Wi-Fi turned on, will emit a little ping every 15 to 30 seconds or so. Our technology picks up those pings. It anonymises them, completely randomises them and adds a token for them. We then use that information to provide movement analytics to retailers.

Our initial message was very much digital analytics, or web analytics for physical space. How do people use fitting rooms in a retail environment? Can you measure conversion from different zones? If you are a big high street fashion chain is it useful for you to know that somebody goes to the jeans section and spends five minutes there? Retailers know nothing about their stores. It’s a complete black hole. High street retail is taking a real hit over the last few years and we’ve already seen this technology being used by lots of retailers to help them fight back.

Do you have any particular example of case studies or companies you’re working with?

We’re working with Dune. We started with them by just doing Wi-Fi analytics. So, how many people have got Wi-Fi turned on in the shops? How long do they spend there? Very quickly they saw that they had some different data sets and soon enough we took over all of their footfall counting as well as also providing Wi-Fi, which allowed us to validate a lot of our sample sizes because not everyone has Wi-Fi turned on.

One of the other things that Dune was very interested in, which has been quite a big thing for most of our clients, is we measure a zone outside the store. We call it the ‘passer-by’ zone. We can actually help them understand how many people walk in front of a window and then come in. That’s huge, because they can start to look at things like optimising window display marketing. 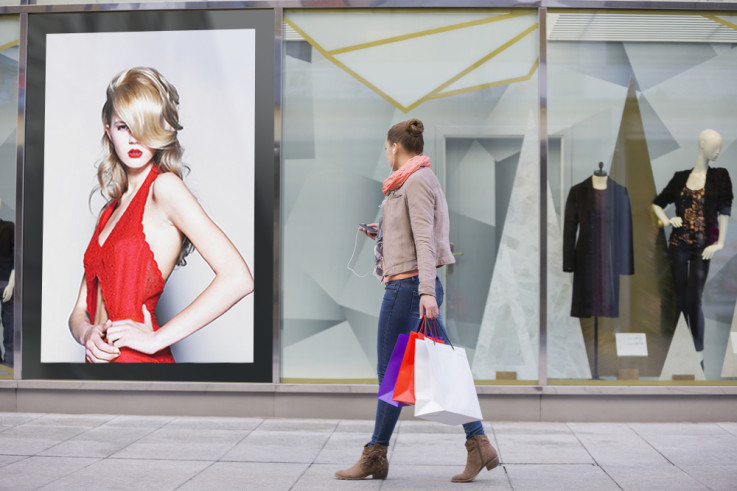 Before, it was all done on people walking through the door. Now we’re doing it based on time. So if someone is in store for five minutes, you would expect them to convert. If they don’t, there might be a problem in store. We provide a dashboard which Dune and all of our customers use. That dashboard runs about 15 minutes behind real time and it allows them to see things like how many customers are in store, and how many of them are new vs returning.

To give you another example, Topshop actually changed the opening hours of Oxford Street based on our data. They were opening at 9:00. They’d opened at 9:00 for about 20 years. They moved it back to 9:30 because they just weren’t seeing conversion in the morning and then went on to extend their efforts to further improve customer service at other times.

So how can your system tell when someone’s at the door and when they are near the till?

The core principle of Walkbase is zones. So we take a map covered in zones based on what’s there. You may have a till area, or a fitting room, or the entrance. Because we deploy our sensors all around the store, they are able to triangulate positions. So you come into store, sensor one, two, three, and four all see you. Because we calibrate them using measurements, we can tell exactly where you’re stood to within a couple of metres. 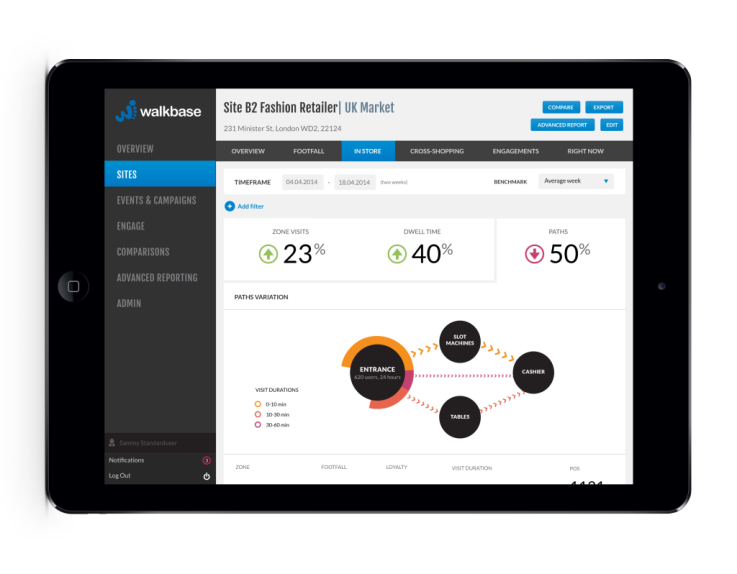 Do you have any other cases of quite interesting learnings that have surprised you or retailers to adapt their retail model?

Good question. Getting retailers bought into the data is always the biggest challenge, especially in the retail world where it’s a bit old fashioned sometimes. We’ve done a cool trial with customers where we’re looking at staffing rotas and comparing them against customer trends.

We’ve also developed something called Engage, which allows us to use Wi-Fi or Bluetooth beacons to message people in proximity. So when they enter a store, we hit them with a message. We took a trial group of a 100 users, and obtained a permission to use their Wi-Fi identifiers for locating them in stores. When they entered the store, we’ve seen them and they’ve then been sent a text message with a digital coupon – exactly the same as one they would receive an email or snail mail. There was a massive increase in redemption and basket size. People are redeeming these offers more than they would do if they were emailed or posted to them because they’re delivered as you walk into the store.

What are you and Walkbase working on next?

We’re working on multiple cool things. One of them is a feature which will be launched very soon. Traditional door counters generally capture 95 percent of people but don’t reveal anything about actual in-store behaviour. Opposite to this, Wi-Fi analytics captures between 50-80 percent of people in a store but gives a very accurate picture of behavioral patterns throughout the store. What we’ll do is take the best of both worlds. We extrapolate the Wi-Fi coverage up to a hundred percent using the sample size from the door counters. That allows us to give a much greater accuracy around all of our analytics stats. That doesn’t sound very interesting but believe me that for retailers it’s been a really big message. The first question I get asked by everybody is, “Well, what happens if somebody doesn’t have a smartphone? What about my gran?” That sort of thing and it’s like, “Well we can’t pick them up.” But actually if we have a count and that’s accurate, we can then extrapolate that. So we’re not picking them up, but we’re extrapolating. The cool thing is that we can do this extrapolation even between stores, to sites which have Wi-Fi analytics only, and it’s very accurate. 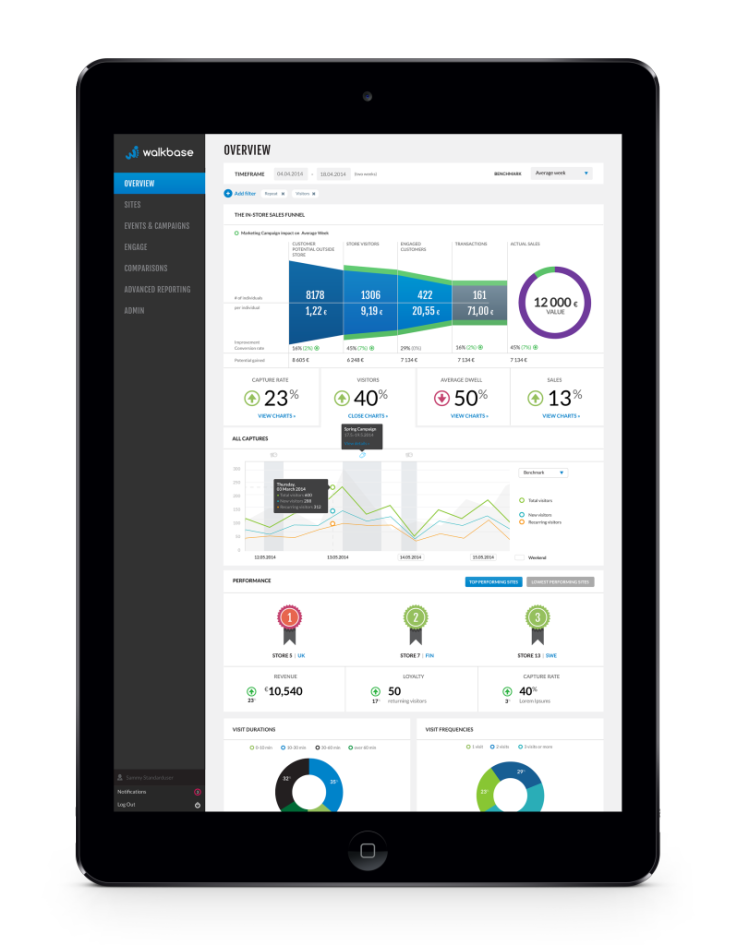 One other thing that we’re doing is asset tracking. Instead of just understanding what people or staff are doing from their smartphones, we’ve also developed some technology which allows us to tag different assets in stores. Trolleys, for example. It’ll pick up when they go missing. If they go outside the zone with their asset tag on, we send a message that says, “Your trolley’s been nicked”. It could get to a point where we’re doing theft prevention.

What do you think retail will look like in 2020?

I don’t believe there’s any such thing as omnichannel. There’s just customer experience. So I think we’ll get to a point where people are serving customers better across multiple channels, and we’re going to see a convergence of web and physical analytics.

I also really like the concept of different sectors working together within their space. For example, there’s a tie up between Tesco and Arcadia Group and it’s cool they’re using each other’s space. We have already seen one supermarket put a gym in store, so it wouldn’t surprise me to see something else along these lines. Who knows? It’s going to be really interesting.

Another big change I’ve seen is that now, for example, it’s not uncommon to see multiple different tablets in-store to allow you to buy online but shop in-store. Retailers are actually starting to realise that it’s not that expensive to run their own Wi-Fi and give guests an awesome experience. What they’re starting to then do is own the data which means they can start to understand a lot more about their customers. That’s great for us though because they’re putting in Wi-Fi APs and we can give them the movement analytics all at the same time. I think that’s been a big shift and will continue to be the one over the next five, six years.

And lastly, name three innovative brands that you really rate at the moment.

RotaGeek is really cool. It’s a staffing scheduling tool. It gives you an app which you push out to all the staff that are working. If someone’s coming in for a shift and they’re ill, they go on to the app and say, “I can’t make my shift today”. It then runs a hunt group across all the other people who could work but aren’t on the rota. The first person to accept the shift gets it.

Arcadia is a winner at the moment too. Some of the things they’re doing in-store is brilliant. They put these call buttons in the fitting rooms. If you need a new size, instead of walking around in your undies looking for the size, you push a button and a member of staff comes and gets it for you. They also run these big events in-store. They did this brilliant thing last year called Playland, where they turned the store into what appeared to be an amusement park. I think they’re a really good example of just how you can innovate.

And one more where I think we’re going to see really big things is MAC, the makeup company. They’ve had huge growth. They are growing in the UK and all over the place and I think they’ve got some really big things coming with their app experience.

To experience the very best of London’s retail for yourself, book one of our Insider Trends retail safaris. Find out how they can benefit your business here.