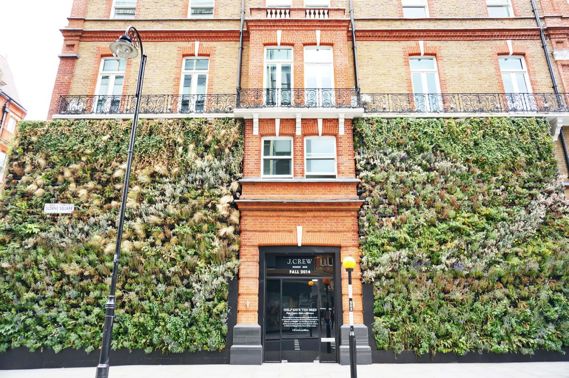 The launch of J.Crew’s 4,500 square foot store in London’s Sloane Square will also be a celebration of its partnership with Buglife – a charity focused on the conservation and protection of bees and other bugs. A main feature of this collaboration includes a vertical garden designed to “provide the bees with pesticide-free gardens to promote pollination.” What does this mean for environmental trends in business? Retail Futures spoke to Paul Hetherington, Buglife Director of Fundraising and Communications, to find out more about their new J.Crew partnership.

“This is our first major corporate collaboration we’ve had as an organisation,” says Paul. “J.Crew got in touch with [us] because they heard about the declining bee population. They wanted to do something about it and since we do a lot of work on the issue, we decided to partner with them. That’s how the vertical garden came about.”

So who’s idea was it? “It was a combined effort between Buglife, J.Crew and the people who installed it, Treebox. We advised them on the kind of plants that should go into the garden, especially the ones that would be attractive to bees.” These include flowers like Myosotis, better known as the Forget-me-not, Coneflowers and Lavenders.

Visible even to those dining alfresco at Colbert, the vertical garden is a striking addition to the late 19th-century building that J.Crew will call home. “They liked the idea of having a garden instead of just standard boarding,” adds Paul. When the store officially opens in September, “the vertical garden [will] be dispersed among schools and other places in the local community.”

This however, won’t signify the end of the collaboration. J.Crew Sloane Square will feature a range of products supporting Buglife, such as honey from the Regents Park Honey Company and a collection of clothing by illustrator Emma Smith. The latter will include hand-drawn illustrations of different bees on various T-shirts for men, women and children. A percentage of the sales will go to the Buglife charity.

In a way, this collaboration reflects J.Crew’s international expansion strategy of being “thoughtful” and “careful.” “We’re not out to become a mass brand and so we’re putting a lot of pressure on the stores we are doing to succeed.” Libby Wadle, Head of Merchandising and Buying at J.Crew told Businessweek. Sticking to the J.Crew ethos of “design plus value,” this relationship with Buglife really brings substance to their UK expansion in a cautious but strategic way. While there are plenty of examples of businesses experimenting with beekeeping, this collaboration makes the companies involvement with local environmental issues much more widely known.

Indeed, J.Crew isn’t the only one benefiting from this partnership. According to Paul, Buglife is in talks with “a company that does vertical garden installations all over the UK.” They are looking to collaborate with them so that future installations – whether commercial or residential – will cater to the needs of local bees, including building bee nests into them. Interesting, but isn’t this dangerous? “Not at all – the bee nests will be for solitary bees so they can’t actually sting. Only honey bees and bumble bees have stings and even so, you have to provoke them to get stung.” The future feels brighter for our buzzing friends.

Want to know more about bees and business? Check out our interview with Urban Bees over at our sister blog, Insider London.